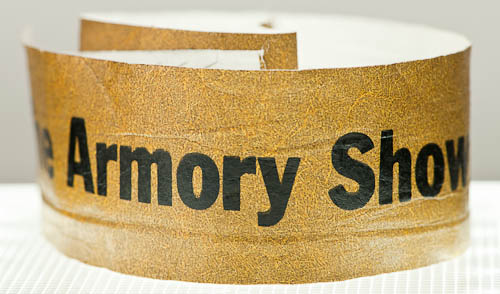 I just returned from this year’s Armory Show. Wow, that place is crazy. An overwhelmingly huge warehouse of identical white cubes stuffed with art. It’s a gallery on steroids. And beside my very sore feet, I also managed to find some fascinating and beautiful work among all of the cacophony. Here are some of the artists that really stood out for me.

Of course, in addition to all this good stuff, the Armory also had a lot of art that was, well, less good. So many booths seemed to be filled with art that was trying so hard to be so darn “clever.” Trying desperately to push the same buttons that have been pushed over and over again. The same tired visual jokes, the same snarky comments about our culture (We’re very consumer-oriented? You don’t say!), the same political symbols (one piece had a zombie Uncle Sam in it. Seriously. What is this, art school?) Whatever. I’m glad I was able to quickly tune this noise out, and push on to all of the good stuff.

Of course, my favorite thing at the show wasn’t a work of art at all. It was this one lone window, squeezed between two booths. that looked out over the harbor. After being so overstimulated, it was an amazingly calm and poignant moment. The small group of people gathered with me, looking out at the water with quiet smiles on their faces, seemed to agree.

Thank you Daniel, I really enjoyed following those links and looking at the work.

Browsing around the Starn Brother’s website I came across their incredible bamboo structures and the photographs they take of them. This work seems to link to the work of Andy Goldsworthy that I particularly like and gives me a bridge back to my work.

I wish I could get to the show for myself.

Excellent reporting! And I was lol@ “less good”.

I too am sick of everyone trying to be so darn clever. I’m working up the courage to go to Art Basel this year. Last time I went, I got a headache from rolling my eyes so hard at all the “less good” stuff.

What’s so wrong with being straight-forward and earnest?!

The worst of the “clever” art was a series of paintings that just had the words “just another painting” on them. Sigh. You *have* to be kidding me! It’s like the pranks we used to play in college, when we’d put gallery labels on water fountains, etc. I couldn’t believe that a gallery dedicated an entire booth at the Armory Show to this “art”.

Thanks for the review, Daniel. I have a couple of booths to write about that I enjoyed, installations, a bit clever but poignant, too. Glad to find you in here.