An interview with Daniel Sroka

Nanosecond to None: Silicon Valley's transformation from a manufacturing to an information economy translates into speed 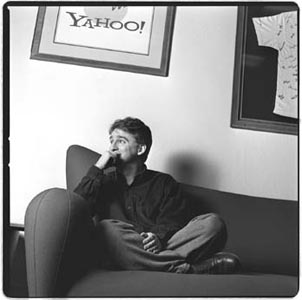 This article originally appeared in the magazine Metro Silicon Valley on January 15, 1998.

ON THE WAY through the cubicle maze at Yahoo!'s expansive office loft in Santa Clara, I'm distracted from my search for Daniel Sroka by an annoying alarm. From unseen speakers in the ceiling, a tinny claxon emits bursts of electronic tones, followed by a mechanical voice: "Please evacuate the building immediately. Proceed to the nearest exit, and move to the designated assembly area.

As I find Sroka (official title: Creative Yahoo), the warning continues to blare, and I realize the floor is shaking under my feet. Sroka looks out his doorway as if to investigate. I climb on one knee up onto a desk to peer over the wall of his cube, and the source of the vibration becomes clear. The heads of a dozen workers poke up above their — "prairie-dogging," in Silicon Valley parlance. Satisfied that there is no smoke or rush for the exits, the Yahoos drop back down to the floor, producing a series of muffled thumps.

"It's an aesthetic of information.... The real reason people find it fun is that suddenly they have access to things they didn't have... before."

Sroka returns to his chair and answers my questions about what it is he's up to here in the yellow-and-purple-striped, balloon-and-poster-strewn gymnasium that is the the nerve center of the biggest success story on the Internet and now one of the valley's legendary companies.

More than 32 million people logged onto one of Yahoo's Web sites during the month of December, according to the company's calculations, and while many simply used it as a search engine — to find something they were already looking for — many others followed Yahoo! links to buy airline tickets, purchase stock from Wall Street firms and make hotel reservations.

Talking about the technological breakthrough that has transformed the workplace — and many a teenager's bedroom — from the valley to Wall Street to Peoria, Sroka clicks through a series of Yahoo! pages, including the financial page. Today, the Dow Jones Average has climbed back over 8,000. Less than a decade ago, nobody thought the Dow would ever break four thousand. Sroka clicks twice more, and we're looking at a graph tracking the Dow since 1990 — showing the steady climb of more than 2,000 points in the past three years — since Yahoo! began to make the Internet accessible to everyday users.

When Sroka was at Hampshire College, a small, innovative school in western Massachusetts, there were no classes offered in Web tour-guide marketing and development, so he studied applied psycholinguistics, where his course work covered "visual communication and how it relates to language development" — in other words, how people read symbols.

Although his work focused on American Sign Language, it forced Sroka to think in new ways about how people understand symbols in general. That gives him a good perch from which to reach people with pictures on a screen.

"When I ask people what they like about Yahoo!, they always say it's because it's not so serious," Sroka says. "But here, look at it." He turns to the site — displayed across the monitor sitting on his computer — then scrolls down so the company's colorful logo is hidden. "It's a bunch of words," he says, shrugging. "The real reason people find it fun is that suddenly they have access to things they didn't have access to before."

"It's an aesthetic of information," he says. "The information dictates what we do. The things people are getting excited about are really straightforward. This isn't on a par with cloning sheep: That is really amazing, but what difference does it make to anyone? This is stuff that really changes people's lives."