This past week I’ve been working on a backlog of photographs I had taken throughout the year, but never got around to editing. One batch in particular was from a photo shoot I did of ice formations. We had just had several days of unstable weather: snow, followed by freezing rain, then an unexpected warm spell. The snow that had collected on the railings of our deck got coated in a quarter inch of ice that then began to melt. As it melted, the interaction of ice, snow, and sun created these amazing mini-sculptures. I cautiously moved around the slippery deck shooting what I could before the sun melted it away, and then promptly forgot all about it.

Last week I rediscovered these photos, can found some pretty cool images. But one in particular caught my eye: a bridge of ice from the railing to a post that had melted to a smooth, round point. There was something about it, something it was trying to say, that I just couldn’t put my finger on. I continued playing with it, trying to see what was there. I rotated it 90 degrees, just to see it from a different angle, and wsa struck by what I saw: a leg extended, covered by a dress of melting snow, and trying on a slipper of ice. 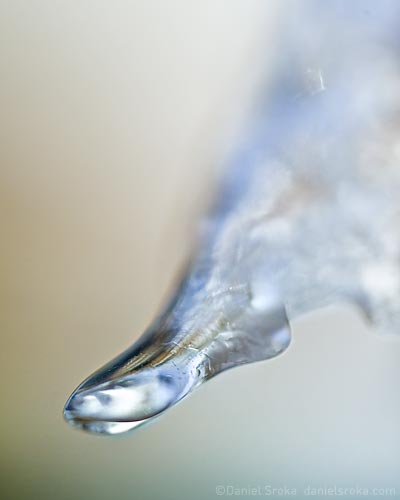 It only seems to happen a few times a year, where I find a photograph that really tells me a story so strongly. I still have more work to do on this photograph, to get it complete, but I’m excited about the direction it is going in.

What a perfectly formed heel and extended toe! And beautifully observed, Daniel. Thanks for sharing.

Daniel, this is tooo awesome! I love it!

You should be excited! This is so unusual and beautiful. Grace personified. A reminder to all artists to look at whatever our design inspiration and progress from all angles, even upside down.

This is excellent – what a great one to dig out of the shoebox! It does have somewhat of a ghostly quality to it.

Amazing image! Your visual sensitivity is so strong. There is a very ethereal feeling to this. It’s not just the shape, but the reflections of color that enhance the sense of it being a foot.

Beautiful shot! I love the shallow depth of field!

This is gorgeous, Dan – and very magical!

Great photo, I do love it, thanks for sharing.

This is a great shot Dan. I love this line of thinking.