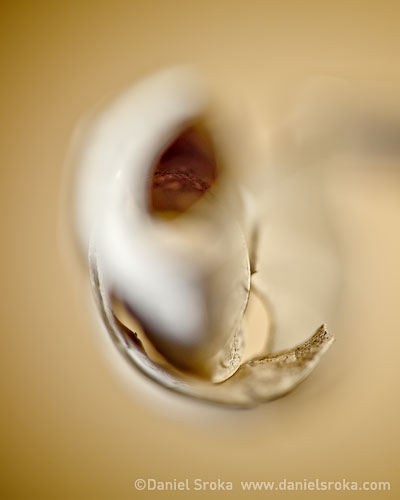 This is one I nearly thew away. I took this photograph over four months ago. It is from a series of photos I took of a very dead, very curled and dried leaf.

Yes, I know, all the leaves I photograph are dead and dried, but this one was particularly gnarly. It had probably been sitting on our house’s walkway all winter, and was just an ugly husk of its former self (that’s it on the right). Still, for some reason, I picked it up . I took a bunch of pictures and wasn’t too happy with them. But being lazy, I didn’t bother to delete them. Then this morning, I stumbled on them again. Most of the photos were crap, to be honest, and I nearly trashed the lot of them. But this one caught my eye. Once again, it was saved from the trash heap, and I’m glad. There’s something oddly primal about it, like a creature bursting out of its egg. It has a feeling of motion and energy that I really like. I named it “Ex Ovo”, from the phrase “omne vivum ex ovo” which is Latin for “every living thing is from an egg”.

Dan, I have to use that word again, “exquisite.” That is the word that comes to mind when I see your work. Thank you for showing the original photo. What a process it must be to get from point A to Point B! Yes, I’m very glad you didn’t trash it too!

I like the image and your title. I will often not even edit any particular outing’s results for months. This way I don’t react to the event more than the image. I sometimes find myself too excited about an image right away and not excited enough about another because of my memory of the event. Months later I can look at pieces more subjectively.

Wow, I think you made a good decision. I really like this. It really fits in nicely with your portfolio of work. Like Paul, I also sometimes need to let work ‘settle’ for awhile before I determine how I really feel about it. I think it is part of the subconscious that needs to come forward to the conscious and stand trial before that judge.

Thanks everyone. Yes, sometimes you just need to set the dough aside and let it rise. I was doing a shoot yesterday, and after a few hours I was getting overwhelmed with artistic fatigue. People don’t always realize that making art is hard, hard work! Looking at the world from an artistic point of view can exhausting. I finally just needed to set my work aside and come back to it another day. We’ll see what it grows into on its own.

Beautiful image, this one — a mystery of an entombed being … like a sarcophagus.

Oh, I love it, I’m so glad that you saved it. I like slightly blurred, mysterious images and this fits the bill. The subtle contrast of the colours is great too.